An Earth-sized planet in the habitable zone aka the "goldilocks zone" has been discovered around Kepler 186, a star in the Cygnus sector.

According to the article:


Kepler-186f is around 500 light-years from Earth in the Cygnus constellation. The habitable zone, also identified as the Goldilocks zone, is the area around a star within which planetary-mass objects with enough atmospheric pressure can sustain liquid water at their surfaces.

While it has been projected that there are at least 40 billion Earth-sized planets circling in our Milky Way Galaxy, this specific finding is labelled the first Earth-sized planet to be discovered in the habitable zone of another star. 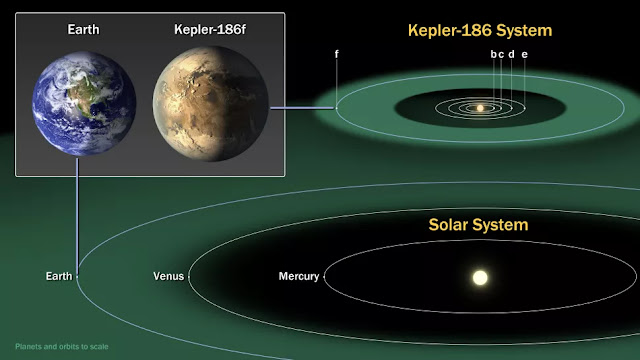 What does this mean?

In addition to Kepler-186f, there are 4 other planets that circle a nearby star within the Kepler-186f system. What this means is that if the neighbouring star to this planet is just like our Sun, then the likelihood of life on this planet exponentially increases.

Most red dwarfs are flare suns too and put out a lot of solar wind. The chances are good this planet is as airless as the moon.

Solar wind and flares strip worlds of their atmosphere. And the rotation period is dicey; there is a good chance this planet is tidally locked, with the same side facing it's sun. That decreases the chances of it having a thick atmosphere like the Earth.

Still it could have one. Certainly it may have a magnetic field (although that seems less likely; the Earth is the only terrestrial rocky planet with one - Mars has none and is almost in vaccuum while Venus largely does not have one and is shrouded in far too much atmosphere. Mercury is airless. So is the Moon, and the outer planetary sized bodies in orbit around the gas giants except for Titan, which possesses a thick atmosphere because it is as cold as liquid nitrogen.)

At any rate it's a fascinating discovery. At 582 light years we won't be visiting any time soon, though.

1 smm heart, This post sheds light on how we can perceive reality.  smm service provider