lf politics is local, or at least starts out that way. The Minnesota Legislature has just finished its session for the year, and after our new governor had promised a quicker, more efficient AND transparent way of doing things, it was back to (lack of) Business As Usual for St. Paul. However, the Republicans managed to prevent some damage due to their majority in the Senate -- things such as a whopping raise in the gasoline tax were defeated as being Not Necessary due to a large budget surplus (the donkeys wanted it for infrastructure because "You never know, we may run out of money").
Bad news is the so-called Sick Tax -- a tax on medical services, which you pay every time you see your doctor and which, of course, hurts those in poor health, who are more likely to be the elderly, and which had been scheduled to "sunset," was instead re-established and kept "forever" (though there's hope that when the GOP takes over the House as well as keeping the Senate, if that ever happens, this abomination of a tax might be killed too.

But some of the best news is contained below!

At 7am this morning the special session ended, bringing to a close the 2019 legislative session.

And, in spite of the rage of anti-gunners everywhere, the end of this session was the death of Red Flag Gun Seizures and Universal Gun Registration!

NO GUN CONTROL was passed in 2019 and there is only one entity to thank for that, and that's the fantastic members and supporters of Minnesota Gun Rights who fought tirelessly all session long to see this gun control agenda put in the grave this year.

Please click on the link or on the image below to watch our "THANK YOU" video to the fantastic men and women of Minnesota Gun Rights! 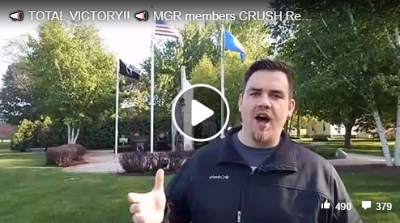 The members of Minnesota Gun Rights poured nearly 120,000 emails, tens of thousands of phone calls and countless petitions into St Paul and D.C. in opposition to this gun control.

As many lawmakers said, the pressure they received from MGR members this session was more than they have ever felt on any issue, during any legislature, ever -- THAT is the reason these bills went up in smoke.

THIS VICTORY IS YOURS AND YOURS ALONE!

You fought the warriors.

And today, you preserved our Second Amendment freedom.

And for that, on behalf the of the Board of Directors of Minnesota Gun Rights, we say ROCK ON and THANK YOU!

I could not be more proud.

SoDana, if you're not already a member of Minnesota Gun Rights, I invite you to join and fight with us now by clicking on this link!

This battle is over, but another will soon come and MGR is always be preparing and gearing up to defend and advance our Second Amendment rights.

In the coming days we will be deploying our post-session wrap-up email series detailing the beautiful work that gun owners did this session, so stay tuned.

Until then, enjoy your weekend, bask in beautiful freedom and give thanks for those who paid the ultimate price so that we might be free.